This could change everything

One of the principles of creativity is, if you can't solve a problem, look at it from a different angle.

This technique is not for yes/no questions. The problem needs to be stated as, "What do I need to know about..." or, "How can I...?"

Draw three cards to describe the situation. Draw a fourth card, and place it face down in the middle. This is the "this could change everything" card, which will force you to reappraise the problem. 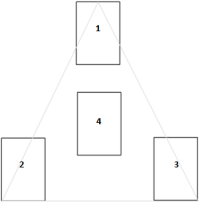 Problem: What does Cynthia need to know about lockdown* and its effect on her life?

Background: Cynthia's salary is half of what it was before lockdown, because the business she works for almost came to a standstill. Her savings are being depleted. She wants to know how to cope and needs some encouragement. 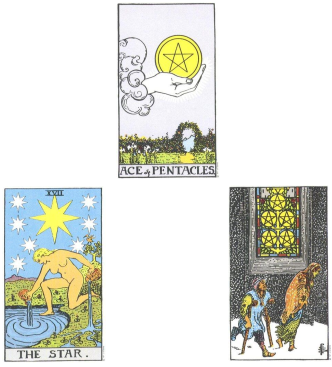 Cynthia feels the Five of Pentacles describes her current situation: she is not destitute, but a great deal poorer than she had been six months ago. She also worries about her health and that of her family.

This card colours her view of the usually positive cards, the Star and the Ace of Pentacles. The Star is a night card, and the woman's resources are spilling out on the ground and in the water. The Ace of Pentacles suggests that there is a long way to go (to the opening in the hedge, and farther to the mountains). The night and the road could be endless. Moreover, she will have to start saving money from scratch, as her funds are nearly gone.

But this could change everything

Turning over the middle card, Cynthia is shocked to see Death. It is true that, on a literal level, everything would change if someone in her family dies. She does not need a reminder that the virus is potentially deadly. However, since she doesn't believe the tarot can foretell the future, she reads the card as needing a new perspective and a reevaluation of the previous three cards.

Going back to the Five of Pentacles, Cynthia notices the light shining behind the stained-glass window. It suggests that, even in the darkest night, help is available if she looks for it. She now reads the Star in its traditional meaning, that there is hope even if everything around her is dark. Possible vaccines are on the horizon, and the lockdown will not last forever. The Ace of Pentacles suggests that she still has some resources, and it is true that at least she hasn't lost her job.

What about another example?

Problem: I've been feeling tired and down. How can I get my energy back?

These are the cards I draw: Two of Cups, Two of Swords, and Three of Wands. 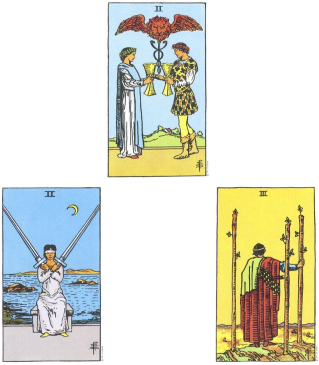 The three outer cards suggest I'm trying to marry (Two of Cups) an inability to make a decision (Two of Swords) to the need to move into the future (Three of Wands). The two opposing actions are draining my energy.

The two Two cards emphasize that I need to make a choice urgently, while the shift from Two to Three in the Three of Wands indicates the urge to move forward.

But this could change everything

I turn over the fourth card: Eight of Swords.

This card indicates I'm not unable to choose, but to do so, I need to remove the blindfold and the cords holding me. I have been tying myself into knots. The eight swords holding me captive indicate I need to stop overthinking the problem and trust my instincts (the woman has one toe in the water, which is traditionally associated with emotions and intuition). I should go with the option that gives me pleasure (Cups), not the one that will hold me down (Swords). And whichever choice I make, I am in a place of safety (the castle in the background). Once I have made my decision, my energy will return.

The card also reminds me of the restrictions placed on us during lockdown. As they are removed, with more resources, I will find it easier to make a decision. If the choice is not yet obvious, I can use a decision spread to move me forward.

*In South Africa, full lockdown started at the end of March 2020; since then, even though lockdown is not over, the government has gradually lifted many of the restrictions.