A happiness spread
So what?

When you get stuck at a card, try using all your senses to spark your imagination. 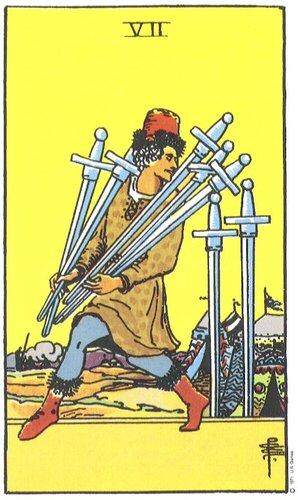 Look at the Seven of Swords, for example.

If you were on the card, what would you smell? Smoke? Perhaps the man in the Seven of Swords set a fire as well as stole some swords. Fear? Perhaps that is the emotion you should focus on now. Pancakes from the circus tents? Perhaps you should put down your swords and do something pleasurable.

See? Does he see a chance for escape, or is he looking in the wrong direction? What does he see behind him: pursuers, laughing children, or whatever he is escaping from? Is he looking back to see who is calling him?

Touch? Those swords must cut his hands. What pain must he endure to get away? Or does he feel wood? Is he trying to hide toy swords as a prank? Or maybe they’re plastic swords from a play? Do his feet touch hard gravel or the floorboards of a stage? How would this change the way you see the card?

Taste? Is that blood on the swords? Perhaps the fight is still going on, and this man is trying to escape from it? Can he still taste the sweetness of the ice cream he ate at the fair?

Hear? Are those sounds from a heated battle, or the quiet of a camp after a hard day’s fighting? Or perhaps he hears the sounds of pursuit? Music from the fair?

* The image is the Seven of Swords from the Rider-Waite Tarot.

[This technique was first described on SynTAROTis.]

Posted by Martie Groenewald at 08:00 AM in Card meanings | Permalink | Comments (0)