Acting on tarot: Using active verbs to solve a problem

How can we use active verbs to solve a problem with tarot cards?

In a recent post, I described the use of a set of active verbs in problem-solving. The SCAMPER technique is described in Two for one: A tarot technique.

It refers to the active verbs substitute, combine, adjust, modify, magnify, minify, put to other uses, eliminate, reverse, and rearrange.

We can create a tarot version of SCAMPER by extracting active verbs from tarot cards. The best cards for this technique are the pip cards (Twos to Tens) in each suit.

If you look at these cards, you will see the images show people (and other creatures) doing something active:

Even some of the major arcana cards are active:

These are all active verbs.

When you’re solving a problem, an active verb might hold the key to the solution.

Let’s say your problem is your mother-in-law doesn’t like you, and shows it in various ways. This makes your interactions with her and any family gatherings awkward. How can you decrease the pain? 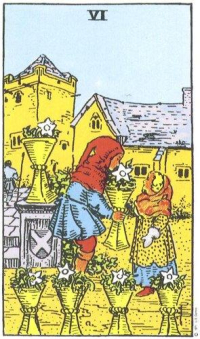 Suppose you draw the Six of Cups.

You choose the verb give from this card. (It’s almost Xmas, anyway). The verb suggests that you:

Posted by Martie Groenewald at 07:00 AM in Creativity techniques | Permalink | Comments (0)