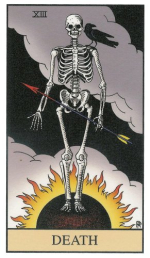 This article looks at:

[A version of this post first appeared on SynTAROTis.]

Some tarot cards seem frightening or depressing, and most people would prefer not to draw them for a reading. What happens when one of these cards falls in a positive position such as Blessing, Advice, Something you value, or Something that will help you? 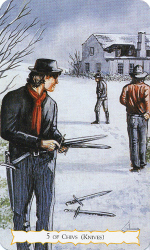 Or, of course, the opposite might happen. You might draw a card that seems happy and positive, in a negative position such as Fears, Obstacles, Disadvantages, Warning, or Burden. What does this mean for a reading?

Then again, a card could be ambiguous, neither good nor bad.

Let's look at some of these cards before we extract guidelines for dealing with them.

[The post discusses most of these cards as they are conventionally portrayed in the Rider-Waite Tarot and decks based on it.]

In most tarot decks, frightening or gloomy cards include:

How could these ever be seen as positive? 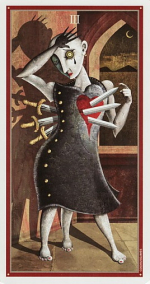 Let's start with the Three of Wands. How could you see this card positively? Well, maybe it shows putting your head above your heart (Swords represent the intellect). Or it could mean that something painful is improving. 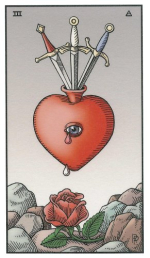 This card is not always portrayed negatively. In the Three of Swords from the Alchemical deck, the tears flowing from the heart is watering a rose.

The Devil could tell you that you are not as constricted as you think. Look at the chains binding the two people in the Rider-Waite deck: don't you think it would be easy to shrug them off? You might break free from something holding you back.

The calamity that overtakes you in the Tower may be what you need. You may break free of something. Another possibility is a breakthrough or a flash of inspiration.

Death could show you are finally free of something or undergoing a transformation. 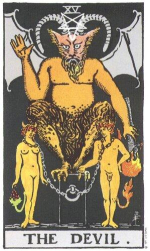 The Ten of Swords could suggest you have beaten something at last, or that it is finally over.

The Ten of Wands with its heavy burden could suggest you will make it. Not only can you carry the load, but the end is in sight (the Rider-Waite deck shows a town in the near distance).

The man in the Five of Cups is mourning the spilt contents from three of the cups. But two of the cups are still upright, and in the distance, you can see a bridge that leads to a castle. Bridge over troubled water? Be grateful for whatever is left? Or perhaps a warning not to cry over spilt milk. 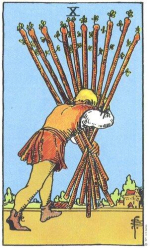 The two beggars on the Five of Pentacles don't think there is any hope for them. They are dressed in rags and walking barefoot in the snow. One is on crutches. The card would seem irredeemably sad, but only if you ignore the welcoming light and promise of safety in the church window. Protection and warmth are closer than you think. (Of course, this could also mean that those in the warmth and safety of the church are ignoring the beggars.) Another possibility is an enduring relationship that doesn't end when things get rough.

The bandaged man on the Rider-Waite Nine of Wands looks beaten and resigned to his fate, but he could also tell you, "You made it, you survived."

It is difficult to read the Five of Swords as anything but negative, especially if the card shows the smirk on the victor's face. If you ignore the grin (or use a deck with no grin on the victor's face, you could read the card as having won the match, and perhaps against the odds (there are usually two or more losing opponents). The card could also suggest cleaning up.

The Bohemian Gothic poses an interesting question in its Five of Swords: who is the victor here? Could it be the werewolf who has managed to capture his prey, or the woman who successfully seduced him (with malice aforethought)?

The Nine of Swords is another problematic card in a favourable position. Perhaps you have shaken off a nightmare and are glad to be finally awake?

The Eight of Cups seems miserable, but you might be moving on to better things, or leaving something that has caused you pain. 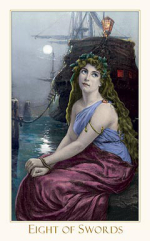 Then we get to positive cards in unfavourable positions.

The Six of Wands, Two, Three, and Ten of Cups, Nine and Ten of Pentacles, the Lovers, Strength, the Star, the Sun, and the World are usually positive cards. (By no means the only positive cards.) They suggest love, hope, courage, victory, joy, luxury, family and integration. How would they fare in contrary positions? 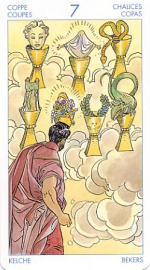 Could you read the Six of Wands (victory) in an unfavourable position? What if, instead of the victorious rider, you are one of the onlookers? A slave, perhaps, or the ones on the losing side in the war? This card is also sometimes read as indicating a pyrrhic victory; in other words, one that cost so much that the victory seems hollow.

The Lovers show love and choice, but if you look carefully, you will see the snake in the tree. Like Paradise, this garden harbours evil. 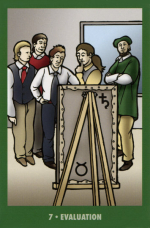 Is the Queen of Cups focusing on the love and happiness that the cup represents, or is she refusing to look at reality? In the Rider-Waite deck, her expression could be interpreted as anger, not love.

Are you celebrating friendship in the Three of Cups, or do you feel like an outsider? And could too much partying be a problem for you? In a love reading, the Three of Cups could suggest a third person involved. 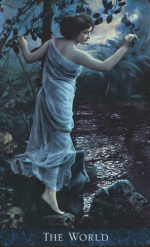 The Nine of Pentacles usually shows a woman enjoying the wealth and her luxurious garden, with a castle (security) in the background. But look at the falcon on the woman's arm. The falcon is a sign of cruelty, which is a disquieting find in this card. A hooded falcon can also signify being cruelly held in check, or having to keep a tight rein on instincts. Or perhaps the woman is living a 'hooded' life in a golden cage?

The Sun can burn you.

The Two of Cups may bind you. 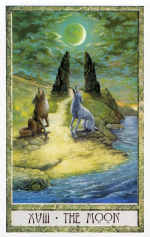 If you were the lion in Strength, you might not feel so serene.

Maybe the Ten of Pentacles, if seen from the perspective of the old man, indicates exclusion.

Aces are generally regarded as positive—showing potential and a hopeful new beginning. However, they do not suggest that you have the good things associated with their particular suit. You only have the potential, and how you use it is up to you. The hands on the Ace of Wands and Ace of Swords could be holding weapons. 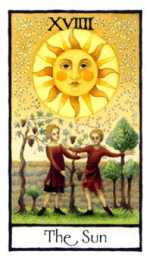 Kings and Queens usually incorporate the strengths of their suit in a masculine or feminine way. But every strength can also be a weakness and the positive its own negative. The Queen of Pentacles, for example, is the nurturing mother in the deck. She could also be an interfering busybody. The Queen of Cups is loving and intuitive, but may also be soppy, sentimental, and ruled by emotions.

Knights are chivalrous and noble, but they can also act like teenagers. Look at the Knight of Swords: he looks demented. The Knight of Wands might come to your rescue, but is perhaps too impulsive and enthusiastic to help. The Knight of Cups in the Rider-Waite deck looks worried rather than self-assured. The Knight of Pentacles is slow and steady, but perhaps lazy and caught in a rut. 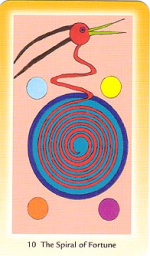 Some cards are ambiguous. It is difficult to tell whether they are showing you something good, or warning you against something bad.

These enigmatic cards could take their meaning from the rest of the spread. The position of the card in the spread—Fears, for example—might make it clear whether the card is read as positive or as negative. Also, the question asked and the subject of the reading may give clues (for example, a reading about finances would not welcome the Seven of Cups).

You could also look at the rest of the spread. If the cards are predominantly hopeful, the more positive interpretations of an ambiguous card could fit. And vice versa, of course.

The Seven of Cups suggests that the person on the card has many options. He has not yet made his choice. Are too many choices confusing him, or does he delight in having options? Is he faced with dreams or temptations? Maybe he is dreaming his life away, building castles in the air, or he could be letting his imagination out to play. 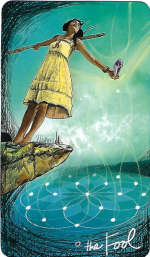 In the Three of Wands, is that your ship coming in, or are you sending something out with hope (and fear) in your heart?

The Wheel of Fortune could suggest good luck, but could also warn that a change is in the air—good or bad. The wheel turns, and the snake or the jackal may take top position.

The Fool could either fall or fly. He might be foolish or uplifted by faith. Older decks depicted the Fool as the village idiot, which at best reflects foolish wisdom and, at worst, madness. Later decks added spirituality (the mountains in the background suggest he has been on a spiritual quest), innocence, and the beginning of a grand adventure. Which interpretation on the spectrum of interpretations is suitable?

Is the Seven of Wands a warning of conflict to come, or a sign that you are successfully holding the enemy back?

And what is happening in the Three of Pentacles—is the artist being praised, or criticized?

The Six of Swords: are these people fleeing, or leaving on a journey?

The woman in the Eight of Swords is bound and blindfolded. You could read that as constraints, or note that, in many decks, the woman could easily free herself. The castle in the background suggests safety, not danger. In the Victorian Romantic Tarot, the designers highlighted the ambiguity of the card by showing an enigmatic expression on the woman's face. She does not seem to be upset about the constraints. 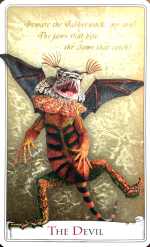 The Seven of Pentacles is another card that can be positive or negative. Some tarot readers label this card failure. Others see a man evaluating the work he has done. But in interpreting the card as evaluation, the ambiguity is back. Is he satisfied or disappointed?

And then there is the Moon. Do you see dreams or nightmares? Illusion, or the creative imagination you need to be a successful artist?

Cards used in this post (in order of appearance):

Posted by Martie Groenewald at 08:00 AM in Card meanings, Tips | Permalink | Comments (0)